Home › Wall Street Reform › These 3 Laws Would Actually Reform Wall Street, and They Deserve Your Support. See Why.

These 3 Laws Would Actually Reform Wall Street, and They Deserve Your Support. See Why. 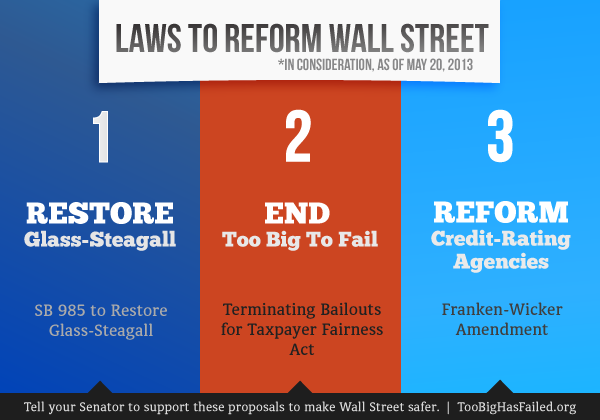 Sometimes Wall Street reform seems completely hopeless. After all, it’s been over four years since the collapse of Lehman Brothers, and we still haven’t seen much change.

However, there’s good reason to keep up the fight.  Right now there are three laws aiming to reform Wall Street that actually have teeth and could make a real difference. Here’s a very brief introduction to each and an explanation of why each is worth supporting.

Last week—exactly 80 years after the original Glass-Steagall bill was introduced—Senator Tom Harkin introduced a bill to restore Glass-Steagall. This depression-era law separated vanilla commercial banking from speculative investment banking. It broke up the enormous and unwieldy banking conglomerates and made sure that customers’ deposit money wasn’t tied to the speculation on Wall Street.

Why you should support it: Breaking up the megabanks will make them easier to manage, diminish their size, and reduce the likelihood that any of them are “too big to fail.” Also, by separating investment and commercial banking, the banking lobby will be more fractured, making it harder for the megabanks to uniformly capture Congress.

Read more about the bill.

The Brown-Vitter Act would require the six US megabanks to raise at least 15% equity instead of their current levels of ~5%. When Wall Street banks only have 5% equity, it means that their activities are funded on 95% debt—meaning that a loss of just 5% could wipe these banks out and make them insolvent (leading them to make demands for more bailouts).

Read more about the bill. Also see The Bankers’ New Clothes, which explains why it’s essential to raise equity requirements.

In 2010 Senators Al Franken and Roger Wicker proposed an amendment to Dodd-Frank that would require the rating criteria for Wall Street products to be determined by an independent board rather than the (captured) rating agencies. It’s like this: In the lead-up to the financial crisis, the rating agencies were paid directly by the Wall Street banks, creating an insane conflict of interest: Each rating agency was motivated to give Wall Street’s products the best ratings so Wall Street would continue to employ them and not take their business to a competing rating agency.

Why you should support it: The conflict of interest between Wall Street and the rating agencies led to thousands and thousands of financial products on Wall Street receiving good ratings that didn’t deserve them. This fiasco directly led more and more people to invest in these products, which ultimately hurt us all tremendously when it was discovered that the well rated products were toxic and essentially worthless. We can’t afford to keep the status quo with the rating agencies.

The Franken-Wicker Amendment was postponed because government agencies wanted to do research before implementing it. Well, now the research is done, and as of last week the amendment is back up for debate. Read more about the amendment.

We advocates of Wall Street reform can talk about why Wall Street is awful all we want, but such complaints will only really make a difference as they lead the public to pressure legislators to reform the law.

If politicians know that their constituents will not accept business as usual on Wall Street, they’ll be far more likely to act. We need to channel the justified anger at Wall Street into direct action, and each of these bills are worthwhile for that achieving that end. Tell your Senator to support Wall Street reform. (And if your Senator already supports these reforms, thank them for their efforts.)

0 comments on “These 3 Laws Would Actually Reform Wall Street, and They Deserve Your Support. See Why.”

1 Pings/Trackbacks for "These 3 Laws Would Actually Reform Wall Street, and They Deserve Your Support. See Why."